Welcome to my second expedition into the jungles of Sian's story telling Sunday! As you may recall from May's post here there was a second part of this tale of mine waiting to be told.... 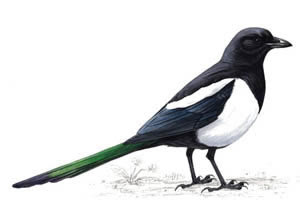 I believe it was only a short time later when our human Magpie struck again and this time her stolen goods had a little more value (remember last time all the little Brunette stole from her Blonde sister was a mirror).

During this episode, the Brunette had her 4 cousins staying with her and the Blonde sister during the school holidays. The oldest cousins were twins, a boy and a girl, a few years older than the Brunette one, they were also the first grandchildren in the family. The Grandfather, I believe, had bought each of his Daughters, Daughters-in-law and the eldest Grandaughter (the Girl Twin) a special present. A present the Brunette was not given. 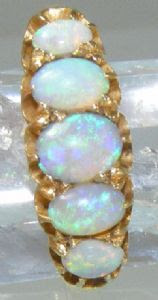 The present was bright and shiny, it glinted in the light ........it was a beautiful gold ring set with diamonds and opals. (Similar to the photograph sourced here) Each of the family females mentioned above, were given one each.

Exact memories of the events that happened in the Brunette's home are unclear.... was she jealous of the presents others had been given? Was it her Magpie instincts kicking in? Did she want to be mean to her Cousin? Or was it an innocent joke that went badly wrong??

The facts of the case are, that the Girl Twin's ring was taken and either hidden or accidentaly dropped into a new secret place. Not the shed this time but the small hole in the downstairs bathroom sink that acted as an overflow outlet! A real Magpie could not be blamed this time but the Brunette and/or the Girl Twin cousin told the parents where the ring was and after many hours of trying to find it, the ring was declared lost!!

Many, many, many years later this same old sink needed to be replaced in a 'downstairs bathroom refurbishment'! As the sink was pulled out the Brunette's father asked if it could be broken to search inside for the long lost ring. There it was, almost perfect except for one missing stone, having sat in the hidey hole for over 20 years! The stone was replaced and the ring was returned to it's original and very grateful Girl Twin cousin owner! The Brunette did not realise that the ring was there and initially did not know it had been found as she no longer lived at home! So a happy ending ...... eventually!

On the first Sunday of each month several established and eloquent story tellers join the story telling queen Sian over on her blog 'High in the Sky' (see it even sounds like a fairy story!) I am just gate crashing (anything to get to the Ball/party that's me!!) but please do check out what everyone else has written and shared today at Sian's.

PS I have had huge difficulties trying to post on many blogs in the last fortnight, either I cannot get the comments box to appear or I cannot sign in so have to be Anonnymous (which I can't even spell!) then sign myself as Furrypig! Anyone got any ideas why? Any solutions? Any help much appreciated as I am so dim with anything vaguely technological but that is a whole other story!!!