I am really loving using the Scrappin' Silhouettes (SS) sketch each week to create a new layout. The plan is there, the foundation and I just need to build on it with my own materials (of which I have plenty!)
This week at SS it's week 5 in July so it's 5 photo's and it is a double page... 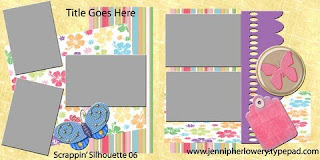 I used several photographs of the Boy taken throughout the football season this year playing for 'the Saints'. He often plays in goal and we managed to get some great pics of him in action, these formed the first 3 photo page. On the opposite page I used 2 snaps of the team from 2 different days one DS was in goal and the other he was on the pitch, I think we have everyone who plays on the team and they are a great bunch (they can get feisty but then so can us parents on the sidelines!!) 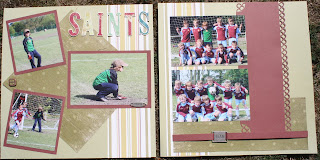 I'm not sure of the manufacturer of the papers but I did use a couple of metal embellishments from Making Memories ( I think they were a Hobbycraft bargain!) and the large chipboard letters are K & Co. These were one of the first things I bought to scrapbook with and like so much of my stash remained unused (until now of course!).
I was slightly too late adding my pic (totally my fault!) so my pages are not on the site with the DT's but there are some fab LO's to look at there so please go visit this weeks Scrappin' Silhouette Challenge! Also there are a few more of my fellow DT members introduced... I am so lucky to be surrounded by such talent and really hope some of it rubs off on me!!
Posted by furrypig at 11:26