I actually made it into work yesterday, although I wasn't brave enough to try and get the car out of the close so I walked! It took about an hour and was fairly pleasant although it was very slippery in places. I contemplated catching a bus part way but despite the fact there were people at every bus stop en route, sadly not one bus passed me on my journey. Because I am attemptin a partial project 365 ie I am blogging rather than scrapping I took my camera with me! I only took one photograph and that was of a large dead tree very close to home. 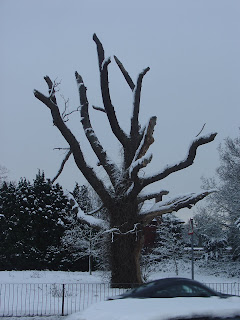 I decided it would be intersting to photograph it at different times throughout the year in varying conditions ie light,weather, seasons etc etc.
Today I decided the children really needed to get out the house as they had been in all day yesterday whilst I was working and were in their PJ's all day. Molly was not amused at the plan as she didn't have time to 'do her hair' and we were sooo embarrassing as we decided to carry the Christmas tree with us. We always take the tree to the local park for recycling but always in the car, this year we thought it would be fun to carry it there, then continue on to the local supermarket and stock up on a few provisions.
Molly stomped off and was always at least 10 feet away from the tree carriers. 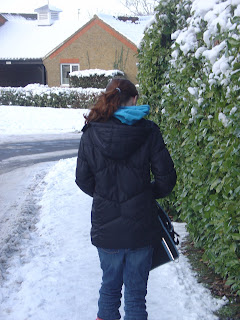 Elliot and Hubby did the transporting initially but Elliot's hands got cold and wet so he wasn't very happy. 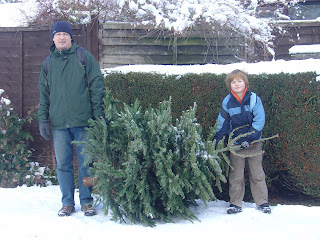 It was dragged the rest of the way by hubby, well I had to take the photographs..... 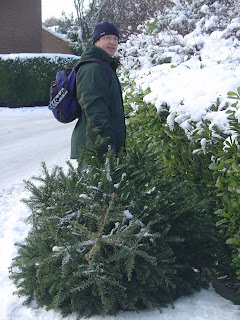 officially Christmas has gone for another year.....
Posted by furrypig at 20:55