Hullo and welcome to my blog, I guess you are travelling around the globe visiting all these amazing bloggers and their tasty treats. So far you should have had your drinks/appetizers, your soups/salads, your sides/main dishes and now you are on to desserts (aka sweets/puds/cake all things naughty and yummy!!). Hopefully you arrived here from Stephanie.
Here is the complete list in case you missed anyone or have got a wee bit lost with all the international jet setting!

Fiona @ Staring at the Sea – http://fiona-staringatthesea.blogspot.com/

Amy @ Over at our Place - http://overatourplace.blogspot.com/

The “Not So” Small One @ From High in the Sky – http://fromhighinthesky.blogspot.com/

Karen @ Tales from the Scrapheap - http://talesfromthescrapheap.blogspot.com/

This blog hop was organised by the wonderful Deb at Paper Turtle over in Arizona USA, please take time to look at her blog as it is an inspiration. I am addicted to her posts and her beautiful photography and love her dedication to her family (big Hi to Marti!). I wish we were all eating, drinking and chatting together as it would be a great party. Instead I am helping a friend at a jumble sale for Great Ormond Street Children's Hospital and this evening I am at a fundraising event for my son's scout group... it's bingo night!
I was going to amke the easiest ever Key Lime Pie recipe that my friend gave me but instead I have made chocolate refrigerator cake for Deb's party and I am taking the left overs to the bingo. I chose this recipe as my mum used to make something similar and we called it chocolate crunch. It made an appearance at all church teas and lots of celebrations.
I like it as it uses store cupboard ingredients that are readily available, it is simple to make and easily transportable.....
firstly I took a packet of digestive biscuits (400g) I think these are similar to Graham Crackers but I have made this recipe with any biscuits/cookies I have to hand in the past 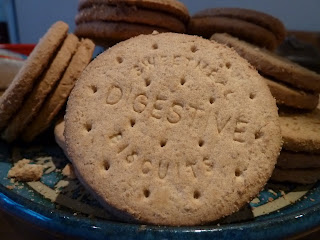 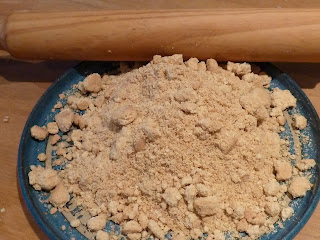 To a saucepan I added 175g of butter (margarine will do), 250g of golden syrup and 500g of dark chocolate (I have used a mixture of dark and milk before)... boy half a kilo of chocolate!! 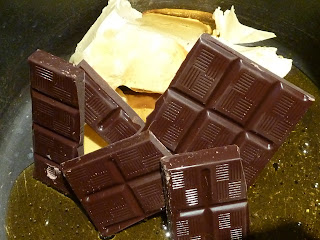 heat gently and stir until melted 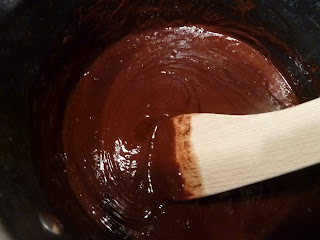 add 300g of dried fruit, I have used a mixture of sultanas and cherries as this is what I had in the cupboard but you can use anything or substitute some for nuts or marshmallows 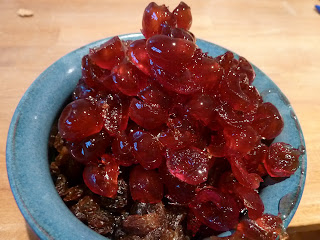 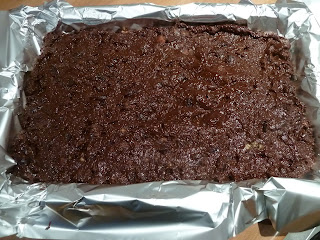 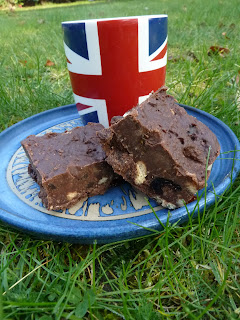 Time for the March family x 12 blog hop hosted by Margie... where has that month gone???
February included a family holiday for a week in Suffolk with my parents. We had really variable weather including snow..... 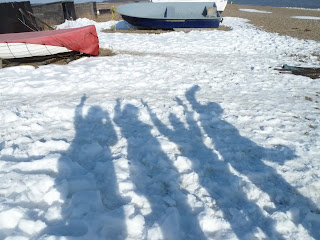 that's us on Dunwich beach, I don't think I can remember being in the snow and on the beach ever before!! Can anyone guess what we are trying to spell?? They wouldn't pose long enough for me to get a better shot!
We also saw some sunsets...... 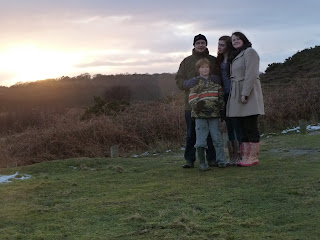 although it was still cold and not long after this photo was taken we found that the car battery was flat and we had to get help! By then it was pitch black and we were cold and damp in a car park in the middle of nowhere!
I think this is my favourite family shot for February 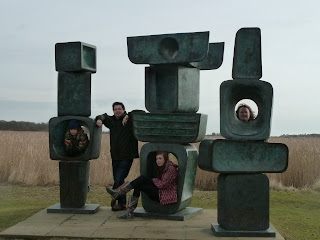 This 'Bronze' is titled 'the Family of Man', is by Barbara Hepworth and is found in the grounds of Snape Maltings, The photo was taken by my Dad and I have an alternative version where he stands in the same spot as me!
My post layout is not quite going to plan (I blame blogger!!) so I do apologise but hope that you will continue hopping round visiting all the other family photographers this month
Margie http://xnomads.typepad.com/blog
Moncia http://questtoperfectimperfection.blogspot.com
Ruth http://www.chattycraftyartypig.blogspot.com
Jo http://www.mrsbeee.blogspot.com
Jill http://jillconyers.com
Patricia http://patoliveira.woodpress.com/
Thanks for visiting today and I hope to see you for April's family x 12 blog hop (please contact Margie if you would like to join in)
Posted by furrypig at 14:00 12 comments:

It was an ordinary day, just like any other. In fact so indistinguishable from any other day that I cannot tell you the date or even the day now. I was home alone, the children were at school, husband at work, a normal afternoon. The telephone rang and I answered it. I had won a holiday!
Off course I had won holidays before, I was familiar with the cold call announcing an amazing win. The caller always explained the fabulous prize, then explained the catch! Sometimes a compulsory attendance for 2 people at a London based seminar (read sales event) and/ or all flights and taxes had to be paid by me ......... so not really a free holiday at all!!
This caller claimed to be from a travel agent (one I had never heard off),she said I had won a holiday for 2 people to New Zealand (not very believable) and that it was the prize in a competition I had entered (which I didn't even recall!) I listened intently for the catch to come but it didn't. I gave a few of my details said I would discuss it with my husband and the 'travel agent' would call me again.
I immediately looked up the travel agency online and it seemed to be real. I looked up the competition I had entered and it clearly existed, the prize from an online lingerie company no less... a holiday of a lifetime and rather expensive swimwear. I spoke to my husband and we decided to watch and wait.
I was still in denial when we arrived at the airport, I expected to be told there were no flights, no holiday and no win. But it was all real! I had indeed won an all expenses trip for a week to New
Zealand.
We didn't take many photos, we missed the children dreadfully, we wished we had extended our stay (we did manage 10 days in the end) and we really loved the small part of New Zealand we saw.
Hundreds of dolphins (with a few whales) on a boat trip from Auckland 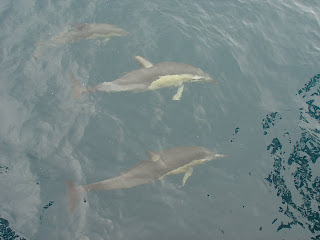 A vineyard tour on the Island of Waiheke 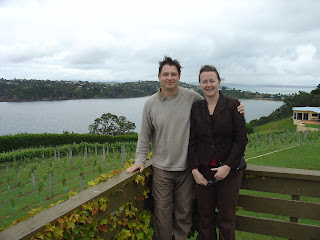 A rainbow over the Coromandel 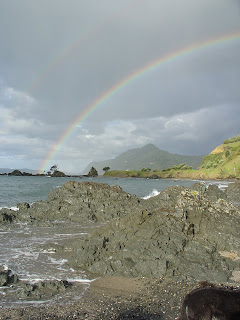 Why do some people have all the luck???
Have you ever been a winner? Have you ever known someone personally that has won the lottery or won something else amazing?? Actually I have! 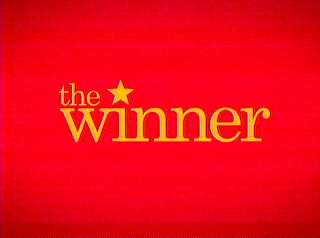 source
Many years ago when I was in my early teens, the biggest supermarket ever in the UK was built nearby. When it first opened there were loads of promotions and in store competitions. The main object of everyone's desire was a car, a brand new mini and many people entered multiple times, repeatedly writing their details on paper and posting them in the contest box.
There was a grand presentation of the car and a celebrity to present the keys. The winner had posted one entry only. The family that won were due to go on their annual camping holiday, so arrived with their ancient estate car full of equipment. The press were there and took fake photos, they made the dad stoop as he was taller than the celebrity. They reported the story incorrectly, the wrong model of car, the wrong colour and quoted the mother inaccurately. 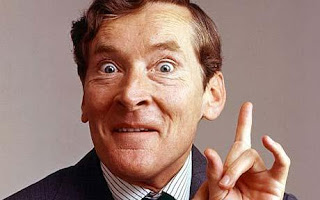 source
Kenneth Williams was the celebrity ( hands up who remembers him from all those fabulous Carry On films???). He was fantastic with the family putting them at ease prior to the presentation and telling them funny stories. He asked if they had packed everything and said once he travelled abroad and had forgotten his socks, he sent his aide to buy some from a local marketplace, he wore the socks in the heat and the dye came out and he had dark blue feet for the rest of his trip..... a very funny man! He has sadly passed away now but he did write 'the Kenneth Williams Diaries' but his day out at an Essex supermarket did not feature!!
Todays true story was brought to you by Sian's Story Telling Sunday check her blog for many more terrific tales. Come back next month as I think there may be another 'winning' story.
Posted by furrypig at 11:38 30 comments: