He has finally made up his mind, he has made the decision, it was totally his choice and he is moving on.

As a parent you would naurally protect your child from any and every harmful activity that life would throw at them. In reality this is impossible and probably not healthy, it is not going to prepare these children for the harsh reality of the world that awaits them. Having said all of that if I could take away each tear, each doubt and each hurt my son has felt in recent times I would do it in the blink of an eye, in a heartbeat.... as my heart is full of love for this boy of mine... 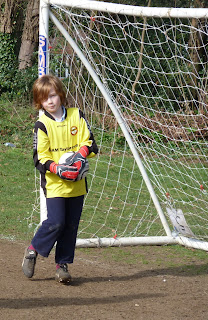 Children can be very hurtful especially to other children.

My gorgeous boy tried out a new football team today, they welcomed him, he knew some of them but everyone was so friendly, full of smiles for the new boy.

It is the end of the season and the current team have done very well but DS no longer feels part of that team, after 4 years he has decided to leave. He played his last match a couple of weeks ago and I think that will have been his final game with that team. So we are saying farewell.

I am so proud of him and pleased he has decided what to do and we look forward to training for a few weeks with the new team and joining in matches for the 2011/2012 season!
Posted by furrypig at 17:30