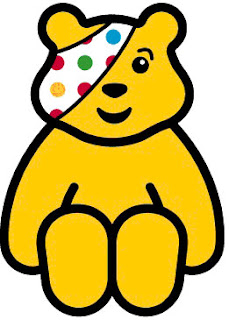 Yesterday was Children in Need here in the UK. It is a televised event on one of the main UK channels, BBC1 and is a massive fundraiser. This annual telethon is now in it's third decade and has raised millions of pounds to help disadvantaged children and young people across the United Kingdom (the total in 2009 was over £39 million!).
We watched some of the show with the children and recorded the rest (over 6 hours in total) but we could fast forward through parts of it. The show is a mixture of entertainment with singing from pop stars like Cheryl Cole, Take That, extracts form West End shows and amusing sketches/dances from non singers/dancers!.
The highlights for me were the ladies from Loose Women performning the Girls Aloud hit 'Promise' and the news readers paying homage to Lady Gaga. But my favourite was a surprise .... from the 80's, I love so much of the music from that era plus I can remember all the lyrics, so I was really excited to see Heaven 17 perform 'Temptation' (but they, like me, have aged somewhat in the last 20 plus years!). I was amused by several other 'acts' including East Street ( a meeting of Eastenders and Coronation Street) and the take on Strictly Come Dancing. Did anyone else watch any of the show (or was it just me!!??) What do you think of Children in Need??
There are nationwide events around the country in aid of this worthy charity and DS's school was no exception. They had a cake sale and I could not resist these Pudsey cakes (he is the yellow cuddly bear mascot) so the children (and their 2 friends) had one each.... yummy! 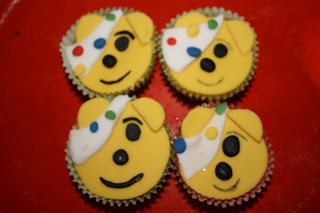 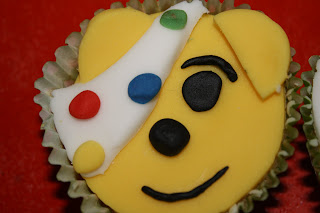