It was DH's birthday at the weekend, so as a rare and special treat the 2 of us went alone to the movies to see a film that was not animated/Pixar/Disney. We saw Avatar in 3D complete with the very glam glasses! I did take a piccy of DH wearing said glasses in the cinema with my mobile, but being a very non-techy person I have no idea how to upload it to my blog (or anywhere else for that matter!!).
So I have had to chose an alternative for Friday's photo and so unable to pick one I chose all these Foodie Friday shots....
57/365
before and after Carrot Cake 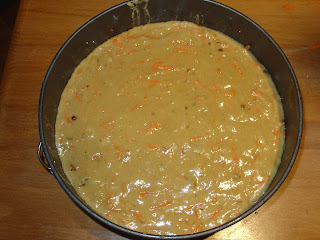 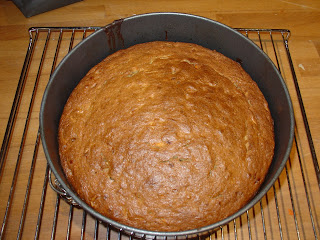 before and still before Cassata 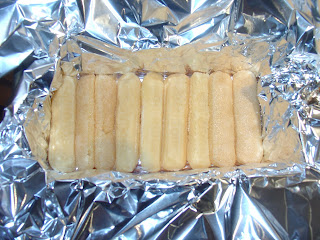 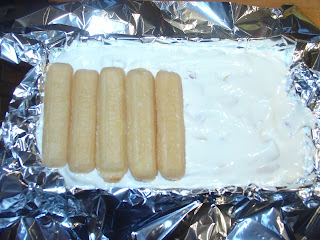 (I forgot to take a pic of the completed Cassata it looked great and tasted fantastic!) Both of these wonderful recipes were taken from the the fabulous Debbie's blog where she does a new and tasty dish each week. These two were super easy and mega yummy!
The cake turned into a fabby frosted birthday cake, complete with candles for the birthday boy!
58/365 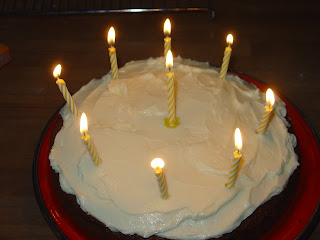 and despite being terribly unorganised I just managed to make a birthday card in a very similar design to the Valentine card. I really like the affect of the doilies (bought in America a couple of years ago) and I did some inking of card and letters and used one of my Heidi Swapp acetate hearts (I really love these!). This was my first easel card and they are very easy and fairly quick to put together, which is just as well as I made it while Hubby was at footie training with DS! 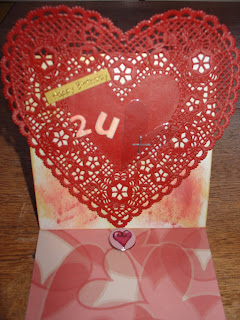 We had friends over in the evening and I made 'Coq au Vin' (no photo but have an easy slow cooker recipe if anyone wants it?). DS was hilarious when he asked what it was and we made him try and figure it out... I think anyone with an 8 year old boy (or who knows one) can probably guess what he said (put your guess in the comments section LOL!!!) It was a really pleasant evening with lots of fab food, fine wine and fantastic company.
Posted by furrypig at 17:42