Yesterday when I got up the thermometer in the kitchen said the outside temperature was -5! (and it wasn't very early as it was the last 'day of the lie in' as today brought with it the return of the school run). We had no snow at all and all that was visible was a heavy ground frost. As I gazed out the kitchen window I spotted this... 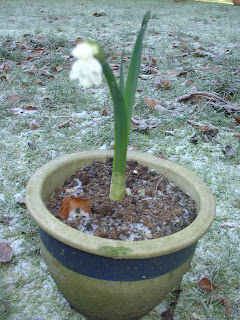 I am not sure exactly what it is, a type of narcissus and a rubbish photo I'm afraid, but for some unexplainable reason in the coldest of temperatures it had decided to bloom. I love things like this, as it just goes to show that against all the odds and sometimes the laws of nature, miracles can and do happen xxx
On a very silly note we all went to the local theatre and saw Cinderella last night. It was hilarious and we all laughed out loud. Plus it starred Gethin Jones which can only be a bonus! Sadly I forgot my camera (pretty rubbish seeing as I am attempting a photo + a day and meant to be taking my camera everywhere!) I did take a few with my mobile but not really sure how to use the camera on it properly... something else I have to learn.
Was very excited to read about Shimelles free class (Document 2010) over on UKS for scrapbooking it sounds exactly what I need so will be following it very closely, watch this space there may soon be some scrapbooking going on!!!
Posted by furrypig at 21:42